Throughout his 15 years with Lightwire, Murray has made an outstanding contribution to internet connectivity in New Zealand. His passion for pioneering innovative wireless internet solutions for rural communities has been the founding driver of what Lightwire is today.

What’s particularly special about Murray is that as well as being a published, respected academic in the field of Network and Computer Science, he is also a practical, can-do Kiwi bloke. Over the years, he has installed some of the first rural wireless radio links, prepaid networks and fibre connections in the Waikato region. He has also helped to build, upgrade and optimise the majority of our Lightwire rural internet sites that are located on hilltops across the Waikato.

Murray’s Lightwire journey began back in December 2002 when he couldn’t get a reliable internet connection to his rural property in Ngahinapuri. His solution –  in true kiwi DIY spirit – was to build one of his own!

At the time, Murray was a Senior Lecturer for the University of Waikato’s Department of Computer Science and a member of the WAND Group, for academic network research and development. He and a group of students [including our current Head of Engineering, Chris Browning] formed a project group, CRCNet, and successfully pioneered an internet connection to Murray’s house via a wireless radio link back to the University of Waikato. This connection marks the beginning of Lightwire’s story.

The genius of the new technology they had built, and its potential to help rural communities, was soon recognised by the academic and local communities. They impressed the Minister of Communications and obtained a grant from the Government to support further research.

As well as helping rural schools, Murray and the CRCNet project group [which by then included Scott Raynel, our current Head of Operations], pioneered a mobile trailer that would provide an internet connection in disaster relief scenarios. They also travelled to remote islands in Samoa, South Africa and the Soloman islands to design and install internet connections to communities that needed it most, particularly for telemedicine purposes.

Murray recalls CRCNet’s natural transition from research projects, to becoming a commercialised organisation – a proper ISP “Rural Link.” Rural homes, business and schools were excited and relieved to finally be able to get a decent internet connection! No sooner, rural broadband sites were popping up all over the Waikato. But the innovation didn’t end there – Murray and the team also pioneered a prepay network service that bought internet to the students of the University of Waikato, to patients and visitors of the Waikato Hospital and to Hamilton CDB’s public.

From CRCNet to RuralLink, No.8 Wireless to Lightwire, it’s been a fantastic journey for Murray. For his farewell gift, there was nothing more fitting or special than presenting Murray with the very first CRCNet computer “the Gateway” which signifies where it all began.

This week marks the end of Murrary’s chapter at Lightwire, but something tells us his work is not done!

Good on you Murray. 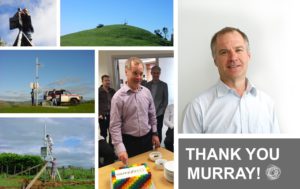 Throughout his 15 years with Lightwire, Murray has made an outstanding contribution to internet connectivity in New Zealand. His passion for pioneering innovative wireless internet